Why is everything in English on this blog? 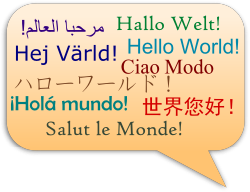 If you have studied my bio, you may wonder why the majority of posts on this blog is written in English, since I also know some other languages.
There are a few simple reasons for this decision, which I will try to explain here.

The English language is in the top three of the list of languages by total number of speakers. Of course the numbers are only estimates, but it is evident that by blogging in English I can reach out to a very great number of people around the world.

You may ask: Why don’t you write in Mandarin or Spanish then?

If you are serious about becoming a programmer or an “IT person”, you may not be able to avoid English literature. The majority of advanced books on computer science and programming is written in English. For the most popular languages and frameworks you might find a book or two in different languages, but they often refer to English structures and models.

Take “software” as an example. It’s an English word, but is integrated in lots of languages and is used all over the world. The only other term you are ever going to use extensively as an alternative is “computer program”. Guess what? “Computer” is also an English word.

If you only code in Brainfuck, you can ignore this. But usually, programming languages use common English words for specific constructs. The most prominent example of this is the keyword if.

if is used in many programming languages as a conditional operator. If you are working with any language at all, you might already know what an integer or a floating number is.

The higher the programming language, the more the language tries to adapt to a more human readable syntax, including English words. So it can be helpful (and sometimes it is essential) to know the language in order to learn a (programming) language.

If you are a non-English speaker, you might not be able to get all the knowledge of this blog, but I hope you will continue to look for useful information in your language and try to learn all this stuff nevertheless.